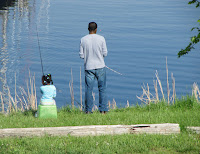 www.aaduna.org The 2011 Spring/Summer Issue of aaduna launched earlier today and two of the three galleries will open with exhibitions on June 17th presenting a body of work by Kai Adwoa-Thomas (home page photo) and Lisa Brennan (current issue photo).  Remember, June 30th is the deadline for submissions for the Fall issue scheduled for launch on October 3rd. Now, there is time to breathe (for a day or two)...sort of! On a different note, if you enjoy the films of Robert Rodríguez and Quentin Taratino (as well as the  classic directorial work of Sam Peckinpah with the 1969 film, "The Wild Bunch"), go rent the 2010 Korean film "The Good The Bad The Weird" by director Kim Jee-Woon, IFC Films).  While subtitled, that small point will not detract from the film's fun, intrigue, scope, and imagination that may remind you of the nuances captured in "El Mariachi" and the English language follow-up "Desperado" (the film that inroduced Salma Hayek)
Post a Comment
Read more
More posts