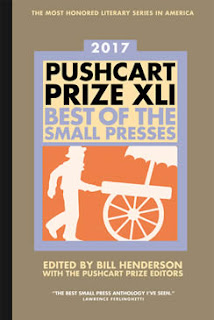 Here we go…. We suspect and are sensitive to the fact that some of you may not know the significance of the Pushcart Prize nominee process. While I can wax somewhat eloquently about the process as it heralds its 42nd annual celebration, I rather have you go to www.pushcartprize.com and read the official info. While those of us who labor in the small press community wait for the annual nomination period, I suggest those unfamiliar with the prize, think of Oscar Award nominees. Think about the celebration and applause for those actors, actresses, directors, producers and others who have been nominated for outstanding work in film. This prize, the “Pushcart,” is the equivalent for small presses. To achieve nomination is a special recognition; to achieve the status as a recipient of the prize can be career changing. While actual recipients will not be announced until April 2017, we encourage you to embrace, support, and read those poets and writers who are aaduna nominees, as w
Post a Comment
Read more
More posts