Grocery Shopping and College teaching...in the name of poetic verses 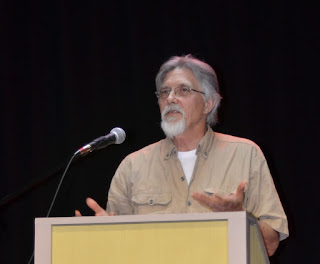 Howard Nelson, aaduna spring fundraiser,  5/28/2015 Howard Nelson is a poet and writer who has the ability to weave magic, wit, and meaningful purpose into ordinary experiences.  Always an audience pleaser, Howard captivates, and his words succinctly capture the flavor, ambiance, and intrigue of Life.  Q uite often, through his imagery and style, he propels the listener to dream bigger and find meaningful treasures buried in the mundaneness of our day to day existence.      An accomplished published poet since the Eighties, his recent work includes  All the Earthly Lovers: Selected &; New Poems  published in 2014.   Mr. Nelson’s poem “The Moon” was published in the 20th anniversary issue of Northern Woodlands magazine, and he was nominated for a Pushcart Prize for “Best of Small Press Publications for 2014.”  He also writes criticism and essays.  He is a member of the Thoreau Society, and his recent pieces on Thoreau have appeared in "The Thoreau Society Bulle
Post a Comment
Read more 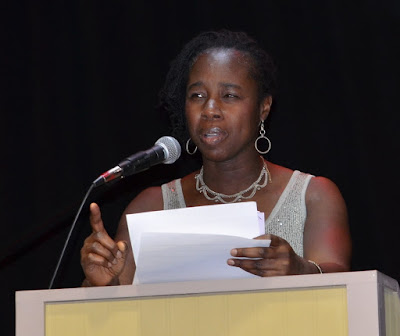 Catherine C. Poku, May 28, 2015 (photo by Lisa Brennan) "Catherine wowed the crowd with her poetry and creative non-fiction.  Her delivery was full of emotion, swagger, and intellectual curiosity as she enabled the audience to gravitate towards her and become captives influenced by her words, thoughts and subtle physical movements that portrayed the characteristics that her words were conveying." Re-live or experience that moment for the first time.  Watch her video.... right here, right now!   https://youtu.be/sppG4p_WSWY Mz. Poku's fiction work is featured in aaduna's 5th anniversary/spring 2015 issue.   Click here  Help us build community!  Share with your friends,  "like" our Aaduna-Inc facebook page and follow us on twitter @ aadunaspeaks !  aaduna-Inc  Visit regularly for updates ! @aadunaspeaks
1 comment
Read more 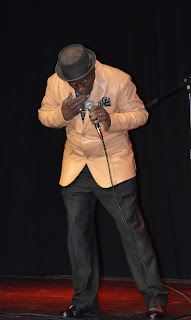 You know the feeling...being riveted by the thump of the bass and that "blue note" that gets your feet to involuntary tap, tap the floor...and then your fingers and thumb start to drum the table....your body eventually gives up and succumbs... you enjoy the movement and do not want the feeling to stop. Raymond Nat Turner, Photo by Lisa Brennan 5/28/2015 Welcome to the world of this jazz poet...his world.  Raymond Nat Turner! Enjoy video clip #4, "Medicine Man," performed by aaduna featured guest poet and spoken word artist, Raymond Nat Turner at aaduna's annual spring fundraiser, "In the Spirit of the Harlem Renaissance...Revisited 2015"  held at Theater Mack,     Auburn, NY on May 28, 2015.   The event was supported by Poets & Writers and the New York State Council on the Arts.  https://youtu.be/luaob58zq8s * * * * * Raymond Nat Turner, NYC poet, is the artistic director of the stalwart JazzPoet
1 comment
Read more
More posts