Retrospective reflection is a good thing 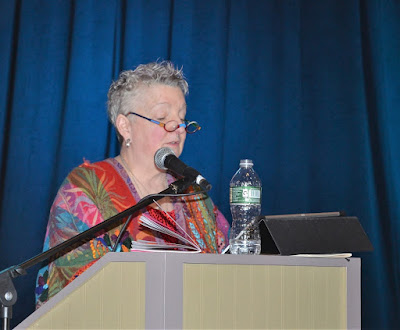 Rachael Z. Ikins, featured writer/poet, Word, Revisited, Cayuga Museum (photo by: Lisa Brennan) On Thursday, April 26 th , Rachael Z. Ikins provided an intimate and well-expressed journey through her writings, which have garnered awards while also sharing anecdotes of a life well-versed in writing in all its various and endearing facets. Introduced by Clare Song Birds Publishing House publisher and editor, Heidi Nightengale, who cited Rachael’s recent recognitions; quipped that they were taught by the same English teacher in school, and they both have become accomplished poets and writers. Draped in a colorful, majestic, sparkling shawl, Ms. Ikins eloquently shared her first prize and honorable mention citations through the National League of American Pen Women, and other regional and state-wide awards for her poetry. She is also an award winning artist/illustrator; but, it was her words that gracefully floated through the Carriage House performance space that enchan
Post a Comment
Read more
More posts