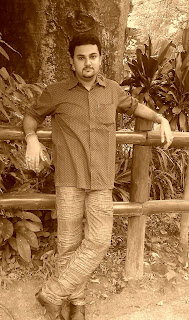 Sonnet Mondal aaduna celebrates and recognizes one of our contributing poets, Sonnet Mondal, who recently received The International Best Poet award from World Poets Quarterly , which is distributed in approximately 65 countries.  In addition, he has been recognized and awarded by the International Poetry Translation and Research Centre, China.   CONGRATULATIONS Sonnet!     To view Sonnet's poetry, published in aaduna's Fall 2011 issue CLICK HERE Sonnet Mondal has authored 6 books of poetry and been widely published in several literary magazines and journals throughout the world.  He was bestowed Poet Laureate from Bombadil Publishing, Sweden in 2009; honored with the appointment of Sub Secretary General of Asia from Poetas Del Mundo, Chile in 2009; recognized as Doctor of Literature from United Writers' Association in 2010 and became the first Indian to win the Azsacra International Poetry award in 2011.  Sonnet has been a featured poet at Asi
Post a Comment
Read more
More posts