April 05, 2013
Is it possible to shrink the world...capture each country and hold on to it solely with the power of words, images, creativity and imagination? We think so. aaduna is trying.... If you have friends around the globe, ask them to visit us at www.aaduna.org and/or www.aadunanotes.blogspot.com We just added: Turkey Barbados Japan to our growing worldwide readership (now read in almost 30 countries.)  Imagine that...and then some more! FYI - "Short Takes" of the work that will be in the Second Anniversary issue will start this weekend.     You've been advised. Get ready!
Post a Comment
Read more 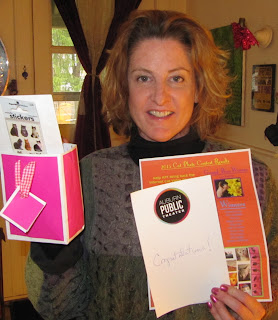 aaduna visual arts editor, Lisa Brennan won the Grand Prize in the 2013 Cat Photo Contest sponsored by the Auburn Public Theater (APT) in Auburn, NY.  With 120 entries, Lisa captured the elegance, simplicity and grandeur of Cleopatra enjoying nature at home.  Cleo is one of two Sphynx cats (her brother, Cairo is the other one) who resides in the Brennan/Berry household.      Lisa Brennan, aaduna Visual Arts Editor As Grand Prize winner, Lisa received two tickets to see "CATS,"Andrew Lloyd Webber's long-running Broadway masterpiece, based on T.S. Eliot's "Old Possum Book of Practical Cats," which will play at the Merry-Go-Round Playhouse between August 21- September 11.  She also received cat toys, catnip, notecards that show the winning entries, and cat stickers.  The Notecards and a calendar featuring winning photos are available for sale since APT is raising funds to "bring back the Internet Cat Video Film Fest [Round Two]" and help suppo
2 comments
Read more
More posts