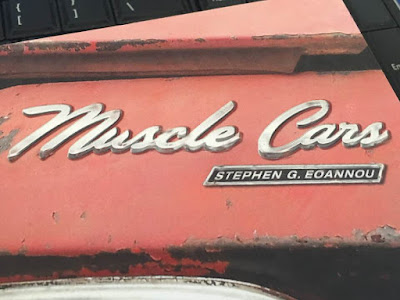 O ’Brien and I were watching a documentary on ESPN, grainy, black and white footage of baseball’s greatest sluggers, when he decided that we should steal Ted Williams’ head…. “What would we do with it?” I asked…. O’Brien stared at me, his arm raised, beer suspended in air, inches short of his mouth. “We’d bury it, stupid. In Fenway. In left field where he played.” And then we were off; jubilantly rounding the bases as if we had just collectively hit a grand slam homerun. Every member of the audience, hands on one enormous bat, legs churning around the diamond, pounding high fives and slapping butts. Imagery has its purpose while being a unique platform for multi-layered weaving of reality. In truth…that feeling is jubilant!  Stephen G. Eoannnou, featured writer/word, revisited reads an excerpt from his book, "Muscle Cars," at the Cayuga Museum Carriage House Theater in Auburn, NY Last night, Stephen G. Eoannou graced the podium at The Car
Post a Comment
Read more
More posts