What color is your nose today? 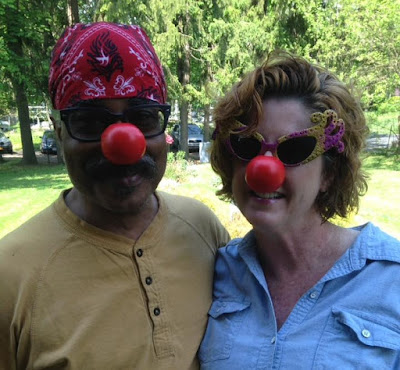 bill berry, Jr & Lisa Brennan (photo by:  Carrie O'Grady) Unless you are enjoying your head in the clouds and have not come down to Earth [and that is alright,] you should know today is " Red Nose Day " to raise funds to help eradicate poverty in children. There is a fundraiser on NBC this evening, and folks are asked to get a red nose and wear it whenever and wherever  you can (red noses are available at Walgreen's drug stores for $1.)  Of course, on tonight's show there will be info on the various ways that you can donate. As you know, poverty is running rampant especially affecting children.  Whatever you do, do something.   Real change is achieved in small ways and measured steps. Plus, the red nose will make you feel happy and bring a smile to someone else!
3 comments
Read more

May 22, 2016
Recently, I read a newspaper article that talked about the fact that Chicago, a major urban United States city, was now one-third white, one-third black, and one-third Latino. At face value, one would acknowledge the reality that the United States is quickly becoming a more diverse and multi-cultural country especially in its major urban metropolises. Georgie Anne Geyer, who happens to be a foreign correspondent and commentator on international affairs for more than 40 years, went a step further in her article, “Somethings needs to be done in Chicago.” Stating that “far too many of the third of Chicago that is now African American come from fractured families as between 70 and 80 percent of black children are now alleged to be born out of wedlock.” is not necessarily the issue, especially since, across American cultures, women getting pregnant without marriage beforehand has become a recognized, if not acceptable social paradigm. And while the increasingly societal stance to incar
Post a Comment
Read more
More posts