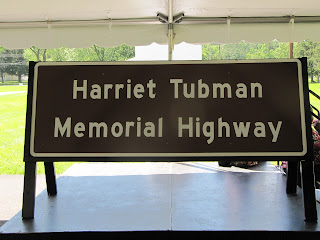 A WITNESS TO HISTORY...  Harriet Tubman legacy...   As part of the 100th anniversary commemoration of Harriet Tubman's passing, a stretch of highway (Route 34) has been named in honor of her.  The City of Auburn marked this occassion with brief speeches at Memorial City Hall and then a "legacy" walk from City Hall to the Tubman Home, on South Street, a walk of 2.38 miles round trip.  At the Tubman homesite, the official sign was unvieled at the end of a brief caremony marked by greetings from federal, state, and local elected officials, as well as remarks from Tubman officials.  Karen Hill, CEO & President, Harriet Tubman Home, Inc. speaks at the Harriet Tubman Memorial Highway dedication ceremony on Friday, August 2, 2013.   . Next day, Saturday August 3, 2013, the City of Auburn celebrated Founder's Day with official remarks from local and state-wide politicians, a speech from guest of honor Joseph H. Holland,  museum tours, Civil War re-enactm
Post a Comment
Read more

Do Poets Rule the Literary World?

August 04, 2013
We rarely see them on the bestseller lists or serving as a talking head on cable or national TV except for an occasional appearance.   However, they shape and influence the deepest of human emotions and compel us to face demons and angels without pretense or confusion.   They have us reflect on history and ponder contemporary issues.   I think each of us wish we could position and connect words the way a poet does…and have the result not embarrass us.   The aaduna 2013 summer issue will have an eclectic and diverse group of poets whose voices weave poignant stories, remembrances, reflections and challenges for us to absorb and contemplate.   Who are they? We will start to profile these artists in a few days.   Come back for a visit.   I guarantee a poetic treat or tease.
Post a Comment
Read more
More posts