The First Friday of October 2011 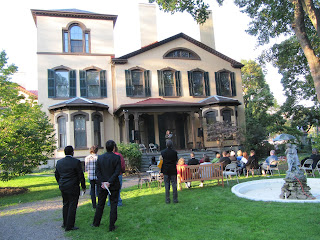 The eloquence of the spoken words floated on the evening’s soft air as insects flitted back ‘n’ forth carrying messages of empowerment, love, despair, and forgiveness to unseen places.


The subtle yet poignant readings captivated the audience and the stillness on the lawn of The Seward House Museum made the words even more powerful and transfixing.


As visual images dotted the walls of the visitor’s entrance and gift shop area, eyes were transfixed by images of places not yet seen; worlds not yet discovered, and artwork that expanded the imagination and caused one to pause…reflect…think.

“aaduna at The Seward House Museum” convened on October 7, 2011, at this National Historic Landmark.  The event was the first-ever public reading and exhibition presenting the work of aaduna’s contributing writers and visual artists.In the same 19th century tradition followed by William Seward when he served as Governor of New York State and as Secretary of State for Abraham Lincoln, the 21st century SH…
Post a Comment
Read more
More posts