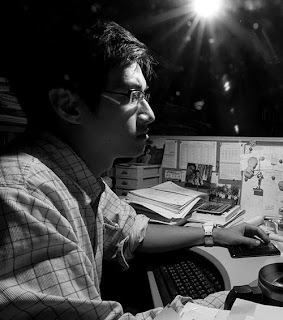 Ho Cheung Lee (Peter) is a prior aaduna contributor.   His poetry graced the winter/spring 2014 anniversary issue , and it is fitting that he returns for this year’s 5th anniversary issue.   To our pleasant surprise, Peter returned with a different gift of words, a fiction piece simply titled “12.” Here is the opening paragraph: The room was spacious and plain . E mptiness was gathered as if to leave room for people’s imagination s . He rested himself on the russet sofa against the cream wall at the back, as he had been told to do , and examined every corner of the interior. The scent of sterilization struck his nose. Is that what I’m here for? The black leather massage chair next to the interlocutors lay motionless like a feminine silhouette against the blinded windows, which glow ed mysteriously in blurry white. He saw himself lying on it, something he had done four days ago. Pointless. The third psychiatrist in two weeks.  **** Lee…12….aaduna….sprin
Post a Comment
Read more
More posts