SAVE THE DATE - An Evening for Celebration – Auburn & its expanding Spirit of Diversity and Inclusion – Part One…Part Two is coming, sooner than later!

November 1, 2018 will be a watershed moment for Auburn NY, City residents, and other CNY community members. On that day and evening, everyone will have the opportunity to embrace and recognize the diversity of African American creativity and thoughtful activism empowered and fueled in the present day by primarily women of color, as well as across culture women who decide to take action while remaining diligent in their efforts to bring truth to power in their positions of local leadership. With that said,
The Harriet Tubman Boosters (HTB) and Friends of Seymour Library (www.friendsofseymourlibrary.org) will host noted and award winning children’s book author, poet, and audience recognized storyteller, Nikki Grimesat Stage Right, Auburn Public Theater, 8 Exchange Street in downtown Auburn NY on November 1, 2018 at 5:30 PM. This event is free and open to the public and will also feature a question and answer period with the featured presenter. Ms. Grimes will speak about
Dry Bones: Bringi…
Post a Comment
Read more 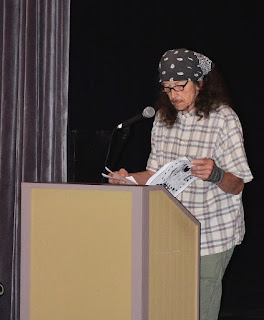 Today’s guest blogger is a poet, musician, literary journal publisher, and all around poignant presence in the Auburn, NY artistic scene. Welcome Ron Van Nostrand, one of the people behind "word, revisited."

“And it was a love fest at the Carriage House behind the Cayuga Museum as Martin Willitts, Jr. took the podium on [last] Thursday evening. It was the second installment of the fall season in the ‘word revisited’ program hosted there the second and fourth Thursday of each month for five weeks by the online literary magazine, “aaduna,” the creative writing and other visual arts publication, “Olive Trees,” and the Cayuga Museum. Martin expressed that evening he would be reading poems about love from the many books he had written.


Especially impressive was the portion of the 15 minute long poem in tribute to the composition of John Coltrane’s, “A Love Supreme.” Martin had composed it while listening to the piece and typing feverishly along with the rhythm.
He told storie…
Post a Comment
Read more
More posts