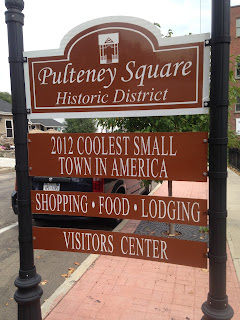 The decision was made this past Saturday morning. We would re-visit Hammondsport, NY voted the “Coolest Small Town in America” in 2012. Lisa Brennan and I have been in the village a few times before but only learned of the “coolest” designation on this last visit.

The road trip idea centered around a pleasant drive along Keuka one of the Finger Lakes; arrive in Hammondsport and have something to eat and drink at the Village Tavern Inn, a noted local establishment that features 99 beers on the wall (actually more than that including drafts and bottles) complemented by an eclectic menu, and afterwards, window shopping (with possible purchases,) the small, unique retail and antique shops along the village’s common square. Once there and starting our stroll, we were shocked that the annual Seaplane Festival was occurring that day. 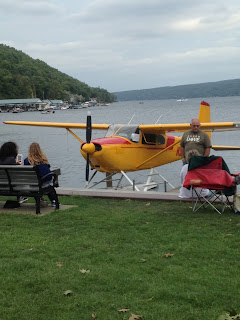 While we were minding our own business, walking around and admiring parked seaplanes, a distinguished person unexpectedly approached us; offered to take a photo of us near a parked seaplane, and explained that he was an independent filmmaker and enjoyed taking pictures for other folk. After our surprise, acceptance, and thanks, a conversation ensued.

We learned that he was a Vietnam era veteran, writer, and filmmaker who hoped to do his next film around this air to lake to land and eventual lift-off back into the lake then take-off to air festival. He shared that he was originally from Rochester, NY and had lived in Hammondsport for more than 20 years. We shared aaduna. To cut to the chase, after cordial conversation and several laughs, he offered a gift. Told us what it was. We were surprised.


We eventually sauntered off to his car to retrieve the gift.


Once there, he signed a copy of his 2015 book. An unexpected partnership and collaboration started to germinate.


He was a writer and independent filmmaker. He spoke fluent Spanish that he learned while serving America in the Navy. His spirit exhumed graciousness, joviality, a keen understanding of the human spirit, and an enriched vitality for life even as he carried the cloak of being a disabled veteran. 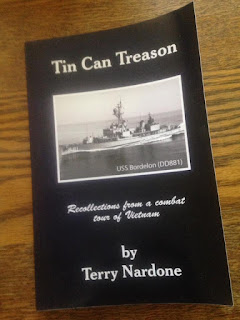 His book, Tin Can Treason, Recollections from a combat tour of Vietnam.

A member of the US Navy’s crew on the destroyer USS Bordelon, after his discharge, Mr. Nardone was diagnosed with “one of the worst cases of post-traumatic stress disorder .…” But his story goes beyond his post-discharge diagnosis.

Nardone captures the concept and actuality of what war does to an individual from the onset of recruitment to discharge to becoming a civilian, again, and all things in between. He shares the complexities of serving in a division of the US military, the perils, friendships, rewards, and risks. Truth be told, his book may be a cautionary and eye-opening tale of perseverance and service; his story transcending what you might expect as a reader. Terry subtly shares the peculiar nuances of military thinking and behavior. He opens the curtains for those of us who never donned a military uniform or gave up our individual will to support the objectives, greater good and overriding welfare of a pre-determined group governed by a leadership, commanding class.

Terry Nardone complemented and enriched our visit to Hammondsport. He gave us a different glimpse into the tucks and folds of an American village and its residents. The subtleties of the well-to-do who reside in magnificent lakefront homes, as well as the several hundred other folks who call the village home, and others who reside in the other lakefront year-round homes. More importantly, Terry shared his personality as a writer. And we appreciate all that he shared and gave.


For further info about how to get a copy of his book, write him via tonardo@roadrunner.com


I suspect you will enjoy his story and reflect on it for a log time to come!

*   *   *
aaduna - a timeless exploration into words and images - is a globally read, multi-cultural, and diverse online literary and visual arts journal established in 2010.  Visit us at www.aaduna.org where we put measurable actions to our words.