Another Intriguing Night to Remember

Auburn is quietly nestled in the rural, agricultural environment of Cayuga County, which is situated in the scenic Finger Lakes region of upstate New York State.  Auburn is also the County’s singular city, and proudly hosts pivotal and nationally recognized cultural institutions such as the Seward House Museum, Cayuga Museum of History and Art, the Harriet Tubman Home (recently designated a “National Park” by the US government) and other cultural gems in addition to the City’s growing stature as a home for award winning locally-based craft beer brewers and restaurant innovators. 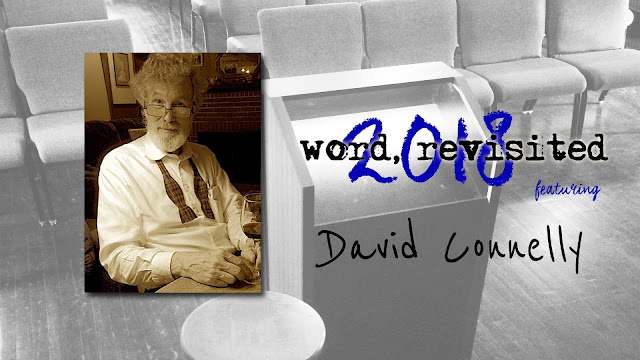 The sixth and final installment of the spring 2018 “word, revisited” literary season occurred last Thursday evening. The featured speaker was David Connelly, writer, journalist, publisher, and adjunct philosophy professor at Cayuga Community College. A prior Pulitzer Prize winner for his newspaper explorations, David is an eloquent speaker and listener. The audience engulfed in the intimacy and nurturing ambiance of the Carriage House (the performance space of the Cayuga Museum,) was the perfect pre-summer setting to listen to the intellectually-driven, genial eloquence of Mr. Connelly.


Ron Van Nostrand, the evening’s emcee, was interviewed by Mr. Connelly back in the day when Ron ran for a New York State Assembly seat,. Ron introduced David with subtle wit, graciousness and quipped that he awaited the opportunity to “turn the tables around” during Connelly’s Q and A segment.

Connelly’s pending book on Thomas Mott Osborne is not yet completed. He hoped publication would be the case when he agreed to participate in the Cayuga Museum, Olive Trees and aaduna bi-weekly literary series. However with that “delay” in his back pocket, David regaled the audience with stories that centered on his initial involvement in the newspaper business as a writer. Highlighting his time with the Daily Tribune in Madera, California in 1977, David further elaborated on his involvement and work with California based periodicals; his eventual transition to Auburn, New York, and his impact on the newspaper business in “history’s hometown.” David then easily transitioned to his current passion and focus as a writer.

Connelly’s reflections and storytelling regarding Thomas Mott Osborne, a progressive prison reformer who was an influential and central figure in New York State politics and innovative prison practices was intriguing and informative. His interest in Osborne (who was born and died in Auburn) marks David’s scholarly pursuits. Connelly easily conversed about the historical past, his recent research, pending book publication, and quietly, though significantly, broached the relevancy of the past to issues of the present. The audience was attentive and engulfed by David’s poignancy and spirited knowledge of his material.


Connelly’s Q  and A session enabled him to further comment, expand and reflect on his background and craft as a writer.  He shared his advice to writers (established and emerging) that could help them create the necessary pathways to birth, nurture and finalize their enriching, powerful, and imaginative stories.


After a brief intermission, the open mic session kicked off.

Ron Van Nostrand read selected poems penned by from prisoners at the Auburn Correctional Facility (ACF) in recognition of Osborne’s involvement with NYS prisons…. “Why I Write Poetry,” by an inmate was followed by “Exclamation or Annihilation” by an imprisoned Black Panther member, who is serving 45 years to life with 40 years served, and hopes for early release….Ron closed out his reading by presenting “Hidden Fruit” by Michael Rhymes, founder of the Phoenix Players Theatrical Group at the ACF and now imprisoned at Attica, a prison facility also in New York State.


The evening then progressed with readings from Karen Faris, Jennifer Maloney, Debra Brillati, Bourke Kennedy, Raymond Remu, Howard Nelson, Rachael Ikins, Ron Newman, and Judith Trice. The open mic literary works could easily comprise an intriguing and powerful poetic anthology that would offer and extoll a wide variety of themes, and if videotaped, an interesting range of reading and presentation styles.  Connelly and then this roster of wordsmiths created a wonderful closing to the spring 2018 season of “word, revisited.”

So, here is a list of open mic snippets that may not necessarily be representative of all the themes

But the evening was not over. Other writings and themes were presented as the open mic session continued.


The rapt attention of the audience during the open mic was a testament to the power and impact of words, sentences, phrases, nuances, and diverse styles of delivery.


David Connelly followed by a spectacular roster of wordsmiths created a wonderful closing to the spring 2018 season of “word, revisited.”


Thunderous applause and generous thanks to Ron Van Nostrand for structuring and emceeing an intriguing spring season of literature in all of its diverse and complex personalities.  And to colleagues Eileen McHugh, Kirsten Wise (both of the Cayuga Museum) and Lisa Brennan (aaduna) for bringing the gift of words in all its ever-changing usages to life and to a resting place in our memories.

“word, revisited” will kick off its fall 2018 season in September. The scheduled dates and featured speakers are


We hope you join us in the fall. Enjoy the few remaining days of spring and the coming months of summer.

The Cayuga Museum of History and Art, in partnership with Olive Trees and aaduna, is continuing a program dedicated to writers and writing. “word, revisited” is a bimonthly, community program exploring original writing in all its diverse, intriguing, provocative, and exciting forms.