The United States' first women's rights convention was held in Seneca Falls, New York in 1848. Approximately 300 people came together in the Wesleyan Chapel to discuss the "Social, Civil, and Religious Condition of Women." On the second day, 68 women and 32 men signed the Declaration of Sentiments. This document inserted the important words, "and women", into the familiar sentences of the Declaration of Independence and demanded women's equality under the law and beyond. Several years before organizing and attending this convention, in 1841, Lucretia Mott reminded a group gathered in Boston that "you have pens and voices."


aaduna remembered the social activism that sparked 19th century grass roots movements by continuing that tradition in 2018 by embracing Mott’s clarion call regarding “pens and voices.” On November 10th in recognition of the 203rd birthday of Elizabeth Cady Stanton on November 12th, another fervent voice in the struggle for the equality of women, the eradication of human slavery, and staunch advocate for human rights, aaduna made its presence known at that historic chapel site.

Simply titled “Fierce” and presented in collaboration with the Women’s Rights National Historical Park, U.S. National Park Service, aaduna’s reading convened three women from diverse backgrounds, whose powerful voices and ability to embolden and strengthen the human spirit through their words, produced an exhilarating afternoon of poetry, as well as reflective commentary from each presenter. Regrettably, the vagrancies and temperament of fall weather in the Finger Lakes region of upstate New York prompted Park Rangers to recommend and aaduna agreed to move the event to the Guntzel Theater in the adjacent NWRHP visitor’s center where the venue’s temperature was more conducive to a relaxed afternoon of poetry and reflection. 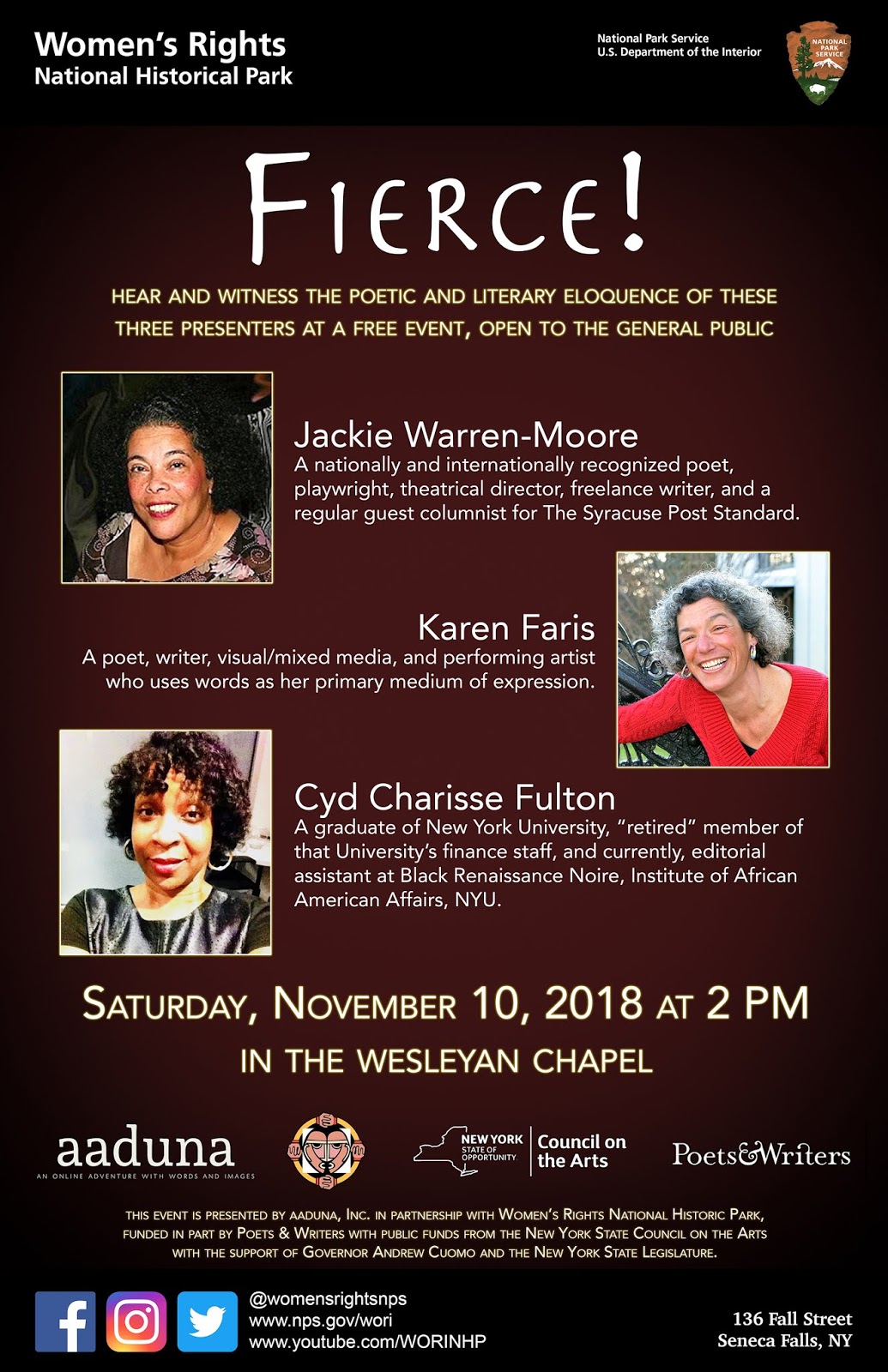 What a time was had by all in attendance! The audience was enthralled. The readers at their best game.

Jackie Warren-Moore voiced a poignancy and understanding of the dynamics of the human condition; what we have to endure in trying times, and our most powerful characteristic, a sense of self that permeates our beings even if we do not recognize our power to manifest change.

Reading in two rounds and engaging a multi-cultural, inter-generational audience in delightful conversation during the intermission and afterwards through book signings or just hanging in the lobby, these fierce women poignantly reminded us of the inherent value of our humanity and the intricacies of being a woman, mother, lover, human being. 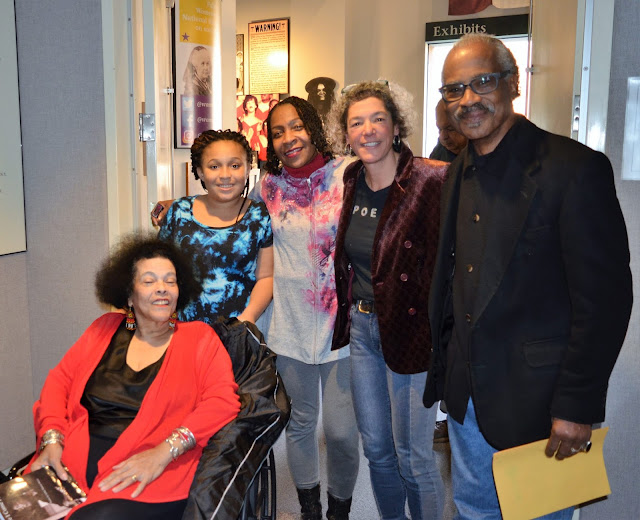 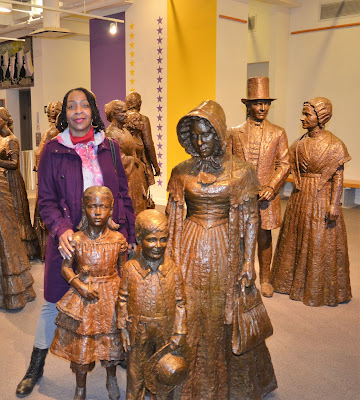 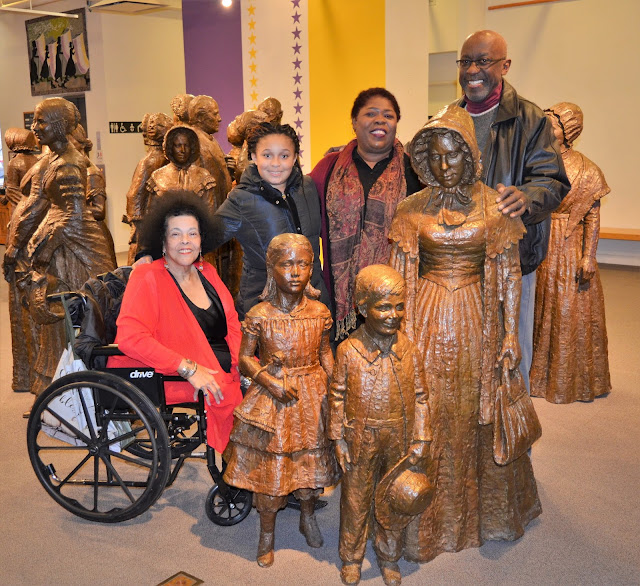 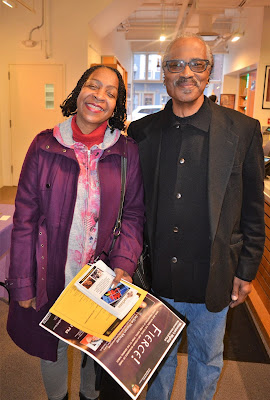 They reminded us our inherent ability to overcome what may appear to be insurmountable obstacles even when we are recipients of uncaring humiliation or debasement from others. They extolled what is strong in each of us. Their words lifted us up; emboldened us, and enabled us to leave the reading at the NWRHP’s visitor’s center with a feeling of richness and confidence in our innate abilities marked by a renewed and spiritual re-invigoration that embellished our consciousness and encouraged us to move forward without apologies and not back.


Simply, they were individually and collectively…

aaduna thanks with appreciative gratitude, thunderous and rousing applause, and will continually value our collaborative partners at the NWRHP. We anticipate future collaborations with these dedicated public servants who become “friends” to the visitors that they serve every day.  But the future will occur during a more comfortable weather situation for all!

aaduna expresses gratitude to the New York State Council on the Arts for their support for and ongoing ability to strengthen multi-cultural and diverse arts, culture and the all too often overlooked Humanities in NYS as fermented by Governor Cuomo’s culturally-aware mindset working with and expanding the NYS Legislature’s spirit to support spirited human endeavors grounded in creative expressions.

Now, with all of that said… 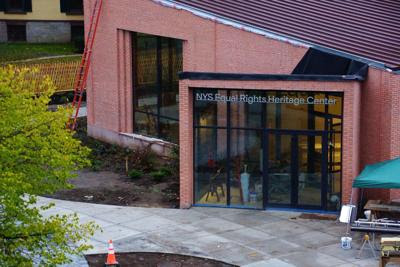 There is a newly constructed and recently opened (as of November 2018) NYS Equal Rights Heritage Center sited in Auburn, NY, and aaduna will present a program at that venue in May 2019!

We entice your spirit of adventure and discovery to visit Auburn, NY and experience the legacies of Harriet Tubman and William Seward and other regional social justice and progressive activists. It is from their actions and dedicated work that America’s path to being a country based on principles of equity, recognition of basic human rights for all citizens, and the propensity to better define, bring a more focused viewpoint, and strengthen the historical intent expressed in the US Constitution. This document continues to serve as a beacon of hope and safety for people who face inhumane conditions in their countries of birth.

aaduna, is more than a thrice –yearly literary and visual arts journal. It is a practical, ongoing manifestation of what can happen when boundaries based on race, culture, orientation, dreams and goals are diminished and eradicated.

aaduna is what happens when words and artistic expressions are realized to serve global and regional humankind.

It is that simple and that complex.

Stay creative and dedicated to your beliefs. Remember, only you can define who you are. So…


It is that simple and that complex.