In a Joyous Mood…Say it loud…

aaduna is ready to roar!

This month…a  special 2020 double issue with intriguing stories- real and imagined; riveting poetry that surprises and prompts reflection; poignant visual images that captures who we are, and not.

Here are snippets from two fiction contributors whose work will be featured in the upcoming issue scheduled for launch in late June.

I come up the drive, turn off onto the field towards the pit. Peering into the side mirror again, I see the derelict trailer bouncing with brush behind me. Today my job is to cut down and haul trees from along the riverbed to a pit across the property. Dad’s getting drunk alone at home. He’s a late stage alcoholic, and I’ll do this type of work my whole life, same as him, until for one reason or another, some beat-up part of me won’t allow it.

Husband of her Youth

Jamila had just finished feeding her chocolate and jet-black labs Fela and Aswad when she opened her back door and there he stood. She nearly screamed but something in his face, something familiar, checked the cry in her throat. Why was he at the back door she wondered, then remembered that their front doorbell wasn’t working.

“Hello,” he said, and her dogs wagged their tails instead of their usual growls, as if they knew him.

She did not recognize the old man standing before her in a dark blue golf shirt, with a receding hairline and sunken cheeks. As she met his hazel-eyes they were not those of a stranger.

As world-wide peaceful demonstrations for social justice continue, there is ongoing demands for the end of lethal police misconduct that subject African Americans to a different standard of police interactions then white folks who commit the same infraction in any given moment.

I trust readers understand that the historical roots fueling local and national “policing” towards Blacks were the legal continuation of keeping former African slaves in a position of degradation,  inferiority and maintaining an unpaid labor force through work gangs and imprisonment.

As writers, poets, visual artists, and other creatives in diverse genres bring a clarity of their voices, talent and actions to the public’s attention, a picture may say it all. 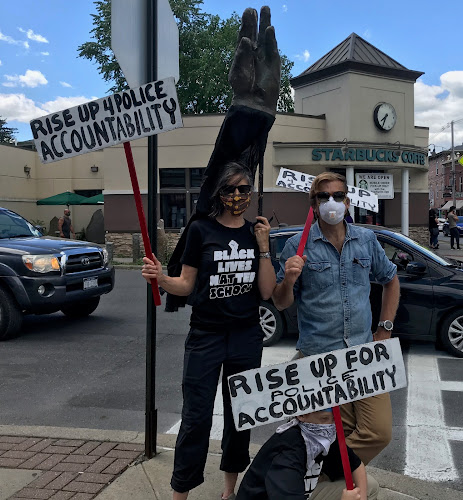 Photo provided by Dr. Sarah Wyman, an English professor at SUNY New Paltz and an aaduna contributing editor (on left.)

Have a social justice story or visual to share with the public?

Send to bill@aaduna.org so we can post it on the official aaduna blog.