Of Sheroes and Heroes and those not yet exalted…not yet!

For far too long, we have relegated extraordinarily super powerful people to the mindset of comic book writers and illustrators. We then revel and exist in another person’s world of character portrayal created by the fantastical thoughts of others; such thoughts developed and manifested at draft boards with pen and ink on poster boards and more than likely finger strokes on a keyboard.

For far too long, we have held that role-models is the provenance of children…pivotal elders presented to youngsters as people to look up to; to compel children to try to mirror the examples of others’ courage, bravery and willingness to tilt against windmills. However, adults also need role models.

For far too long, issues regarding environmental challenges have been visualized by the faces of activists who eerily resemble the majority of people in the western world and their accepted ideologies that may not be necessarily inclusive of any other specific race or indigenous culture.

How silly have we been?

As with any national story there are manipulations of fact and intentional errors of omission regarding critical historical fact. For some reason, which for some is easily explainable, there is an intentional societal preference to uplift the societal culture of one racial group over the intrinsic value of other cultural groups.

How silly have we been. Now…

You may remember a book that you could not put down. The first object you grabbed in the morning and took to your resting spot at night. A book that transformed your thinking and understanding of the world, that emboldened your view of the global environment you unintentionally overlooked, took for granted.

For me, that singular exercise in personal behavioral change struck home after reading Anuradha Rao’s One Earth, People of Color Protecting Our Planet. 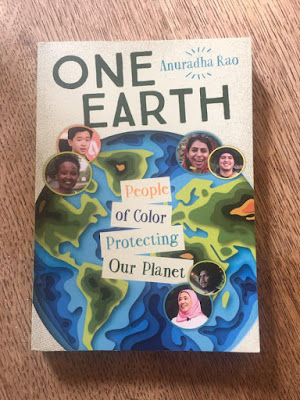 For far too long, environmental activism has been publicly centered and propelled by the majority’s racial and cultural background and privilege standing. Truth be told,  those missteps have disregarded segments of society who have been put asunder in order to build up another societal tribe based solely on race, generational standing fueled by opportunities to build wealth , and as a result, post slavery induced institutional economic power.

We have overlooked the sanctity and inherent power Earth mother and her ability to safeguard humanity. Truth be told, humans have yet to fully safeguard the intrinsic powers of Mother Earth.

Rao presents people of color who are intimately involved in local and consequently global initiatives to safeguard Earth, as well as the historical culture of indigenous people and their descendants. Anu opens our eyes to recognize those warriors who represent us (without sufficient public recognition) through their focused ability to challenge, protect, and honor our diverse heritages.

This book is transformative. It is inspiring. It rips apart the notion that people of color have relegated environmental concerns to the whims and intention of others who do not look like or represent our communities or understand the legacies of our communities.

“One Earth” profiles Black, Indigenous and People of Color (BIPOC) who live and work as environmental defenders. These twenty short biographies feature diverse activists of all ages from around the world.

This book is an epic weaving of fact, of life experiences, of knowledge that emits power, all through the action of “on the ground” activists.

Anu Rao has presented a rich gift of awareness and learning for readers to embrace.

It is our duty, our obligation to grasp that knowledge and carrying it forward to younger generations.

To read. Dissect. And replicate in any way that we can the strengths and dedication of people of color who protect our planet.

In the winter/spring 2014 issue of aaduna, Rao graced our pages with her fiction, “Koblavi Senior.” Here is the opening paragraph:

She was lost. She knew she was lost even before she decided to get off the minibus, its eight seats crammed with eleven adults, five children, two baskets of dried fish and one chicken. She didn’t see what was tied to its roof but had heard it bleating as the rickety vehicle bumped along the dirt road. It pulled away after her descent, sending a cloud of dust in farewell. She blew her nose and looked up and down the road. Not another vehicle in sight.

Anuradha Rao is a conversation biologist, writer and facilitator born and raised in the traditional territories of the Haudenosaunee and Mississauga Nations and currently based in unceded Coast  Salish territories. She has worked on research, conservation, restoration, planning and stewardship projects with communities and organizations on the coast of Canada and in 12other countries. 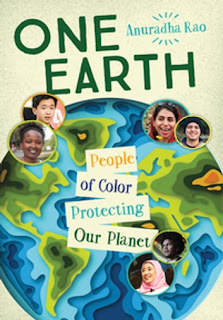 One Earth, People of Color Protecting Our Planet is available from Orca Book Publishers, orcabook.com (a 2020 publication.)