July 20, 2016
Twice nominated 2015 Pushcart Prize nominee for poetry, Michael Lee Johnson recently announced that some of bill berry’s work will be included in the forthcoming poetry anthology “Dandelion in a Vase of Roses,” scheduled for release in late 2016. Johnson served as the anthology's chief editor. 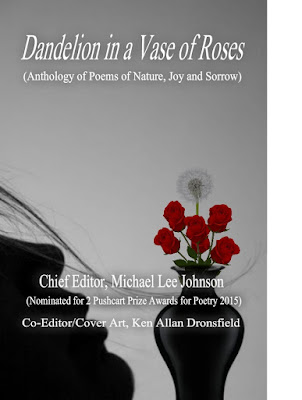 While somewhat of a recluse in the world of publications and public readings, berry is thrilled that he will be represented in the anthology with three recent poems. He states, “The inclusion of ‘Gestures,’ ‘Tap Tap Tap,’ and ‘A soldier’ reflect my current mindset and signifies my ongoing exploration of themes associated with perseverance, dedication, conviction, celebration, and understanding.”

Berry has previous publications, and has read at several venues including The Seward House Museum, a national landmark in Auburn, NY; Bill’s Place, a speakeasy/jazz club located in Harlem, NY; Cayuga Museum of History & Art’s Theatre Mack, and presented at “Words On the Verge,” a monthly reading series convened in Brockport, NY.

We will announce when the anthology is available to the public.

Lisa A. Brennan, aaduna’s visual arts editor and executive manager of administration and marketing was recently nominated for membership on the Board of Governors of the National Association of Nonprofit Organizations & Executives (NANOE.)  bill berry was also nominated with both of them being cited for their work with aaduna.  Here’s the background info on the nomination:


The working group spent a full year compiling a list of prospective Governors. The working group compiled a final list of nominees in May 2016. This list was submitted to the Nominations Committee in June 2016. Nominees were notified July 7, 2016.


*   *   *
aaduna - a timeless exploration into words and images - is a globally read, multi-cultural, and diverse online literary and visual arts journal established in 2010.  Visit us at www.aaduna.org where we put measurable actions to our words.