of excerpts, interview, nomination and publication…aaduna author publishes novel, THEY, a biblical tale of secret genders

In 2015, aaduna published a novel excerpt by Janet Mason that was later nominated for a Pushcart Prize.  The excerpt (published in aaduna’s Summer/Fall 2015, Volume 2,Number 2 issue) titled, “The Mother” begins Book Two (the second and final part ) of THEY, Mason’s new novel that is a biblical tale of secret genders recently published by the small new press, Adelaide Books, New York/Lisbon in 2018. 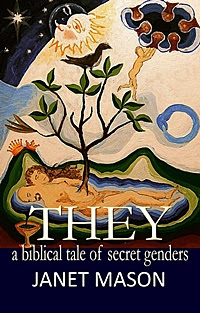 Here is your purchasing and background info:

THEY, a biblical tale of secret genders is available as a print or e-Book on Amazon https://www.amazon.com/They-Biblical-Tale-Secret-Genders/dp/0999516434/ref=tmm_pap_swatch_0?_encoding=UTF8&qid=1544295095&sr=1-1-spelland  and other places online where books are sold.  It is also available through your local bookstore.

“THEY is a groundbreaking work that will prove to be lifesaving for those in the LGBTQ community and enlightening and liberating to others.

“In this novel, we met Tamar from the Hebrew Bible. Tamar lives as a hermit in the desert, is content with her life and is happily barren. She is attached to her pet camel. Her aversion to goat sacrifices becomes so strong that it prompts her to become a vegetarian. Tamar has a twin sister Tabitha who becomes pregnant after seducing a young muscular shepherd. Tamar plots with Tabitha to trick Judah (a patriarch from the Bible) into believing that the baby is his so that she can have status in society rather than being burnt at the stake. Tabitha gives birth to twins. Tamar becomes attached to the children (born intersex), who call her auntie, and follows their line of intersex twins.”

Janet Mason is an award-winning creative writer, teacher, radio commentator, and blogger for The Huffington Post. She records commentary for “This Way Out,” the internationally-aired LGBTQ radio syndicate based in Los Angeles. Her book, Tea Leaves, a memoir of mothers and daughters, published by Bella Books in 2012, was chosen by the American Library Association for its 2013 Over the Rainbow List. Tea Leaves also received a Goldie Award. She is also the author of three poetry books. Mason is a lay minister at the Unitarian Universalist Church of The Restoration located on Stenton Avenue in Philadelphia, USA. For additional info on Janet, please visit: https://tealeavesamemoir.wordpress.com/

"Whoever heard of a divine conception?" Tamar rolled her eyes. She looked skeptically at her twin. Tabitha wrinkled her brow and looked thoughtful. Outside, the wind blew. …. Tamar didn't fear God, but she did fear the wrath of the villagers.”  (--from the opening of THEY, a biblical tale of secret genders)

What reviewers are saying:

“Mason merges together tales from the ancient Hebrew Bible with modern concepts which speak to the world today, exploring gender and sexuality in a fun story that brings out the humanity of the characters we may never have identified with…” -- Curve Magazine (Australia and New York)

“Janet Mason’s spare style evokes a powerful feeling of legend as she reinterprets biblical and pagan stories through the mind and senses of Tamar. THEY’s gods and mortals exist beyond gender binaries, and Tamar exercises wry humor while asking the big questions, subverting the conventional understanding of age-old stories.” ~ Anna Redsand, author, To Drink from the Silver Cup: From Faith Through Exile and Beyond
“I am fascinated by Mason’s ability to weave together biblical historical stories with modern concepts of sexuality and gender. She paints an ancient world full of mysticism, harmony and strife …” -- A Queer Reader

“I found her story to not only be wonderfully written but charming and liberating to us who have lived in a binary world for too long.” – Amos Lassen, biblical scholar and LGBTQ icon

* * *
Here is a snippet of what was initially published in aaduna:

The Mother
(sometime early in the first century)

In the beginning was the Mother.
In the womb, Tamar) took mental notes. The heavens trembled — at least it felt like the heavens. Maybe it was just gas. The Mother shifted. At first, it was too dark to see. But Tamar could feel. At first it felt like chaos — like everything was unconnected. But then she felt something holding her. A curved wall. She was leaning into it. It was soft and warm. She felt her backbone curve behind her. She was half of a circle. Was she floating? There was a chord attached to her belly. She relaxed once she realized that she wouldn’t float away.
There were appendages coming out from her shoulders. She looked down below the chord. On the lower part of her body there was a small bump and on either side of that were two more appendages. There was liquid all around her. She felt warm and safe. She didn’t have to worry yet about breathing.
Whoosh. She flinched. Slosh. Gurgles whizzed by. There was an abbreviated bubbling. After it repeated three times, she identified the sound as a hiccup. After a few moments, there was silence. Then there was a contented hum coming from the distance. Tamar knew it was the Mother, and it calmed her.
The darkness lifted. She saw a distant light glowing through the pink barrier. She looked down and noticed tiny extremities with red lines moving through them. They were attached to the ends of two appendages, on each side of her. She found that she could move them, as if she were trying to grasp something. She knew that these movements would come in handy later. The light went out. Darkness. Tamar felt herself in her body.

aaduna - an online adventure with words and images - a globally read, multi-cultural, and diverse online literary and visual arts journal established in #seward2010.  Visit us at www.aaduna.org where we put measurable actions to our words.